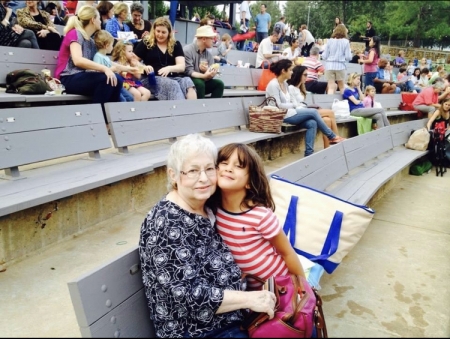 I am cycling in memory of my grandma. In 2000, she was diagnosed with breast cancer, shortly before my parents got married.  My grandma won the first round of her breast cancer battle. A few years later, she was diagnosed with ocular melanoma (eyeball cancer). She won that battle too, but that treatment caused her to progressively  lose vision in that eye. Shortly after I was born, my grandmother was diagnosed with a recurrence of breast cancer. At this time there were more things known about genetics and cancers, and my grandma was found to be brca1+. She won this round of breast cancer but she had to have a single mastectomy with no reconstruction to cure it. A month before my 5th birthday we found out that my mom had brca1 breast cancer, at this time other women in my family had also undergone treatment for breast cancer. It was very difficult for me to watch my family members go through this. 15 years after my grandma's original breast cancer diagnosis, she began her final breast cancer battle with metastatic breast cancer. Thanks to her oncology team we were able to have her with us for more than a year after her terminal cancer diagnosis. Even though she was tired from fighting so hard, she still wanted to be there for all my special moments growing up. On some days when she was too tired we would read, snuggle, and watch movies together. I still miss and think about her everyday.